Once at the top of K-pop, this singer is still going strong 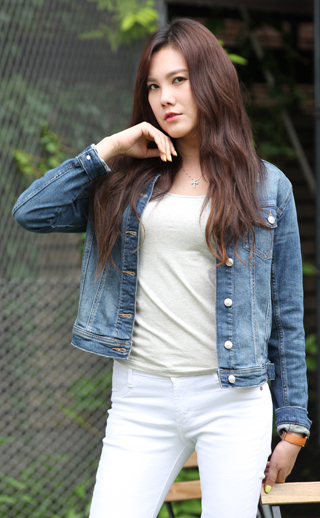 Singer Kim Hyun-jung says her 18-year career in Korea’s music scene has been somewhat like playing the video game Tetris.

At times, things just work out and you clear the line quite easily. At other times, it takes a few tries.

In 1997, Kim catapulted to stardom almost instantly after her debut,

with her distinctively high voice and slim figure - the ordinary image of a female Korean singer by today’s standards, but a rarity at the time.

Although with the dawn of the millennium it seemed like she just disappeared from the mainstream music scene,

she continued to perform and release albums.

But with her recent participation in the “Infinite Challenge” episodes on 1990s music,

she is now enjoying a revival of her golden days, even being recognized by today’s teenagers.

Ilgan Sports, an affiliate of the Korea JoongAng Daily,

met with Kim to discuss her career and her recently released album, “Together Forever 18.”

Q. How would you describe the past 18 years?

A. It’s hard to describe in a short sentence. After all, 18 years is a long time.

I feel like I’ve been playing Tetris all this time. Blocks keep coming down.

Sometimes things just work out and you clear the line quite easily. Sometimes it takes several tries.

Did you experience a slump?

Of course I did. I didn’t have one major slump, but continued to experience small slumps now and then throughout my career.

I wouldn’t have been able to get through them if it weren’t for my fans.

And I hear you now have teenage fans, too?

Yes. There are fans that are in middle and high school. I think it’s because young singers today made remakes of my songs.

It’s so strange that such young people know my songs. Life is funny. Just when you think you’ve reached a limit, it opens new doors.

What does it feel like, rubbing shoulders with such young singers today?

I feel like we are transcending time in a way.

They may be young, but they’re all professionals, so they’re not that different from me.

It’s a delight working with them. On stage, we are all the same.

And I hear you are good at the dance moves to popular songs by pop groups today. Is there a reason you practice them?

I’m just so curious about choreography, how they were made and how they can improve.

And I also feel that I should keep in sync with today’s dance moves to be a better singer myself.

For instance, for my new song, “Attention,” I did all the choreography.

What did you do while you were away from the mainstream music scene?

Because I already have so many hit songs under my belt, I performed here and there.

I also studied music - actually, there are songs that I wrote and composed in the new album.

I found out that I released more than 130 songs already.

So I can actually continue to make a living without releasing new albums (laughs).

Releasing a new album is a challenge, as it could fail. But still, I believe if you are a singer,

you have to continue to release new albums.