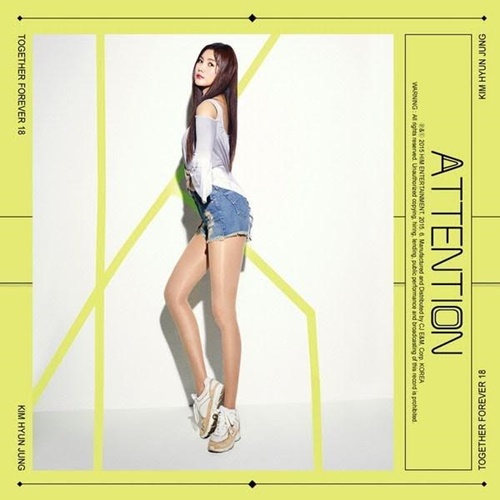 The title song ‘Attention’ and another song ‘Obey’ (literal translation) are in the upper ranks of the music chart of Mnet.

To commemorate the 18th anniversary of her debut, Kim Hyun Jung released the album,

which the title ‘Together Forever 18’ means going together forever.

She participated in writing the lyrics and producing the songs, showing her talents.

The lyrics and the melody of the title song ‘Attention’ were written by Kim Hyun Jung. On June 24, the teaser of its music video was released.

The low vocal range and husky voice of Kim Hyun Jung left a strong impression on the audience.

With the splendid electronic and guitar sound, a dance song of Kim Hyun Jung’s style was completed.

For the song ‘Obey’, it was the favorite song chosen by her fans.

‘Obey’ in this album is the remixed version of the original song in her fifth album released in 2002.

(photo by HIM Entertainment)